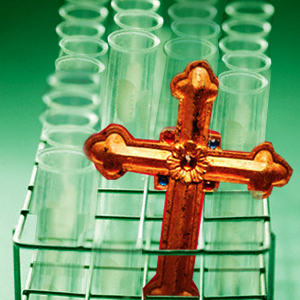 Over at Scot McKnight’s blog, Jesus Creed, the resident scientist-who’s-a-Christian (I hate that I can’t just write “Christian Scientist”), RJS (I have no idea what his full name is, and I couldn’t find it), recently posted a brief post about the ongoing dilemma of a fossil called Tiktaalik rosea, the dating of which and the evolutionary place in which it exists is still in flux. After recounting some of the changing conclusions about this fossil, RJS asks:

Is this kind of give and take an evidence for weakness in the evolutionary hypothesis?

Is it unexpected waffling or the expected progress of scientific discovery and the refinement of understanding?

He goes on to unfold the story even further showing how even more recent revisions to Tiktaalik’s dating have occurred in the past year, and it has greatly altered how we have seen the evolutionary tree of tetrapods. But, he points out, even with all these changes, the new findings have only changed the shape of the tetrapod’s evolutionary tree, not the shape of evolution itself. These “new” findings still support the evolution of tetrapods–we just now know that their evolution looked different than we originally thought. But he ends with this incredibly thoughtful paragraph and set of questions:

The continuing saga of the dating of the appearance of tetrapods is an excellent example of the way science and scientists work. There is no “party line” that must be maintained. The data determines the consensus with much arguing and discussion along the way. New hypotheses are proposed to account for the data and new investigations undertaken to test the hypotheses. This is not evidence of a theory in trouble, but a picture of scientists and scholars at work.

What do you think?

Does this kind of investigation and revision challenge your acceptance of evolution?

Does it strengthen your confidence in the process?