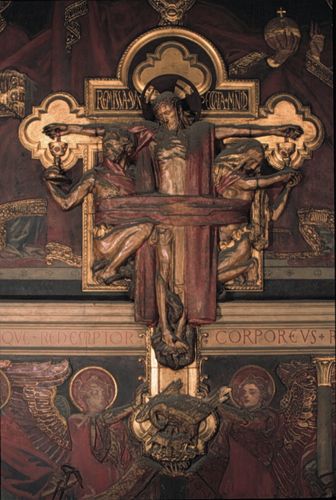 “Being made man, I am maker of man, and redeemer of what I have made. God in the flesh, I redeem body and soul.”

“On the cross is the figure of the dead Christ, with the figures of Adam and Eve, typifying Humanity, kneeling on either side. They are bound closely to the body of Christ, since all are of one flesh, and each holds a chalice to receive the Sacred Blood. About the feet of Adam is entangled the Serpent of Temptation. Above the arms of the cross there is inscribed in Latin “The sins of the world have been redeemed.” At the foot of the cross the Church is symbolized by the Pelican feeding its young, while around it doves symbolize the Seven Gifts of the Holy Spirit.”

Read a full description of the pieces here. Find the official website for the commission here.

One of my top three favorite artists (along with Caravaggio and Rothko) is John Singer Sargent. He was commissioned in the early 1900s to do a series of murals in the upper room of the Boston Public Library called The Triumph of Religion, wherein he subversively uses the iconography of the history of Judaism into Christianity to undermine these “forms” to move on towards what Dietrich Bonhoeffer called “Religionless Christianity” (I don’t know that Sargent would have articulated it like that, but that’s how I took it. Here’s a good post riffing on Bonhoeffer’s idea).

This weekend, on a trip to Boston to see one of my oldest friends, I had the chance to see this piece and it was breathtaking. One particular point of beauty was the crucufix pictured above. In Latin, under his feet, Sargent inscribed the quote above, and I immediately thought of this Advent season and its fullness of meaning.

One thought on “Artist John Singer Sargent on the Advent {5}”