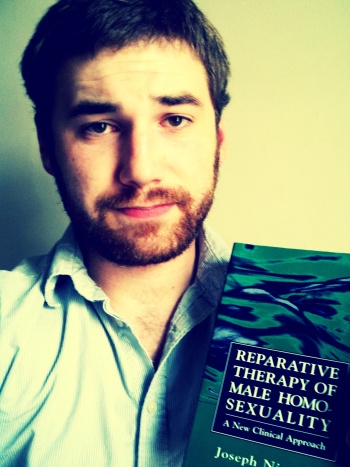 Update III: I wrote some final thoughts on these posts.

Update II: The second part of this post is up.

Update: I wrote some brief thoughts on a frequent reply I’ve received to this post: “what about gays that are wilfully and persistently disobedient in their sin?” Check it out.

Why on earth am I writing such lose-lose posts as these? I have no idea. Well, here we go.

Last week, Exodus International, one of the biggest and most-well-known Evangelical ministries to homosexuals, came out against what’s called “Reparative Therapy” or “Conversion Therapy”. The New York Times had a big write-up on it (as well as NPR) and an interview with Alan Chambers, the President of Exodus International. And now the whole news cycle is all a-flutter over this. Right when I think the story is dead, I see another headline about “rifts” forming in the Evangelical community and such.

Reading these articles has made me so frustrated with both the Right and the Left in their treatment of this discussion. There’s so much to say, I apologize for the lack of flow or organization that follows.

There are some really important things that seem to be getting lost in this discussion–on both sides.

I have a particular connection to this. In college, I (unlike most of the people writing about this, I assume) actually read the primary text concerning Gay Reparative Therapy (my roommates thought I was so weird). It’s called Reparative Therapy of Male Homosexuality by Joseph Nicolosi. I still have my copy (see picture above–see how happy I am to still have it?).

I was a Psychology major, a conservative Christian, and at a very large, urban, secular institution with many gay and lesbian students. I was President of my campus ministry and was really struggling with how best to love my (literal) neighbor. So, I read the book. I don’t know why I did, exactly, but it was weird experience nonetheless.

If I remember correctly, I think by that time I had gotten past the idea that people “chose” to be gay. At the time, I thought that it was a genetic “pre-disposition” that could make it easier for some people to “fall into it” should the right environmental, emotional, and psychological factors come into play. But nevertheless, people weren’t born “homosexual” any more than people were born “alcoholics” or “adulterers”. Sure, they had drives influenced by genetics, but it was ultimately up to them to curb them.

Anyway, reading the book was a weird experience. Even then, as I read it, I was shocked at the weird reaction that unfolded within me. The theory behind the therapy–that male homosexuality was formed by a distortion of masculinity due to a failure of the man’s father–made “sense”. It had all the loose ends tied and–as a self-enclosed system–it “worked”. And yet, there was this part of me that didn’t fully buy in. Something seemed missing. It’s only now, looking back, that I realize what it was:

It was a therapy built entirely around anecdotes and individuals’ subjective short-term responses. As long as you stayed within that self-enclosed system, it all worked and made “sense”. The second you emerged from that system, though, and went to live your life, it seems the “system” started to unravel, leaving people more messed up than if they had never undergone the therapy in the first place.

And so, in my humble opinion, Exodus International is right to dis-avow this therapy and move as far away from it as possible. And churches should be supporting this. But that’s not all.

First, let’s yell at the Right:

Chambers is getting lots of flack for saying (per the NYT article), “those who persist in homosexual behavior could still be saved by Christ and go to heaven”. This is apparently a huge hang-up to many, many evangelicals. They (and the Left, surprisingly) are skipping over what I feel is the far more challenging thing he says, “I believe that any sexual expression outside of heterosexual, monogamous marriage is sinful according to the Bible”.

Evangelicals just had someone praised by The New York Times and most every major news outlet, who openly calls homosexual behavior a sin. He says this, and the Right is demonizing this man? Churches are pulling out of supporting his ministry? Not because he doesn’t think it’s a sin, but because he feels that those that persist in that sin (in the same way that many of those same Conservatives persist in gluttony, pride, avarice, lust, and the like) can still go to heaven?

I’ve got to tell you, I’ve become used to Evangelical craziness, but this is a new one. I understand it’s built off of a whole interpretive idea about the word “abomination” that is used to describe homosexuality a couple of times in the Bible, but really? In Romans 1, homosexuality is exalted right there next to–catch this–disobedience to one’s parents. There’s a not a consistent “extra special”-ness to homosexuality in the Bible. This is a terrible hermeneutic to use against an entire people group.

And I promise I’m not “soft” on doctrine. Nor does it seem Chambers is. He’s saying that in the same way most heterosexuals are never going to lose their biological drive to have sex with more than one person in their lifetime, nor are homosexuals going to lose their natural drive–no matter how much of whatever kind of “therapy” they get. He’s not saying it’s not “sin” or that people should be encouraged to give into it, just that it’s not something that can be so clearly “healed” and that Christ is strong enough to save those people.

It just goes to show, once again, how Evangelical Dogma is essentially (and practically) no different than Catholicism. This all sounds like a Protestant version of “mortal” vs. “venial” sins (similarly, whereas in Catholicism church leaders can only be single, it seems in Evangelicalism, they can only be married; and, salvation comes by way of the faith-ful works of sacraments in Catholicism, but in Evangelicalism, it’s by faith-ful recitation of a “Sinner’s Prayer” and “confessing the Lord Jesus” with your lips. I could go on, but that’s enough).

To Evangelicals, it seems that Homosexuality is (at least functionally, even if not precisely theologically) a “mortal” sin that steals one’s salvation (or rather, in the Protestant formulation that they think resolves the issue, but doesn’t–“proves they never had it”), until they repent and are absolved by the opinion of a holier-than-thou human member of the church (i.e. a “priest” from the “priesthood of believers”).

And the ultimate irony is this: Chambers is actually being the more conservative, more challenging, more counter-cultural, and ultimately, more offensive to our cultural sensibilities than the Fundamentalists are!

He is proclaiming the message that more and more homosexual believers seem to be coming to: the drives themselves are not sinful, but their exercise goes against God’s design for the world, and so, while no easy fix can be offered to “cure” those drives, grace and self-control must be sought to remain celibate to the glory of God–like so many believers before us have. That will get the Left mad more than abusing the Bible to find weird interpretations that elevate homosexuality to be a worse sin–interpretations that are ultimately easily written off.

In the end, Chambers and Exodus International are simply trying to offer the most realistic hope they can to homosexual Christians seeking help.

Tomorrow I will seek to make those on the “Left” mad at me and call me names. Tune in then.

P.S. I want to apologize for my extensive use of the cultural shorthand “Right” and “Left”. I hate the terminology, but it seemed better than any other alternatives at this moment. I know it’s simplistic and only perpetuates division in our society. Please just be gracious and let it go. Hopefully, you get what I mean.