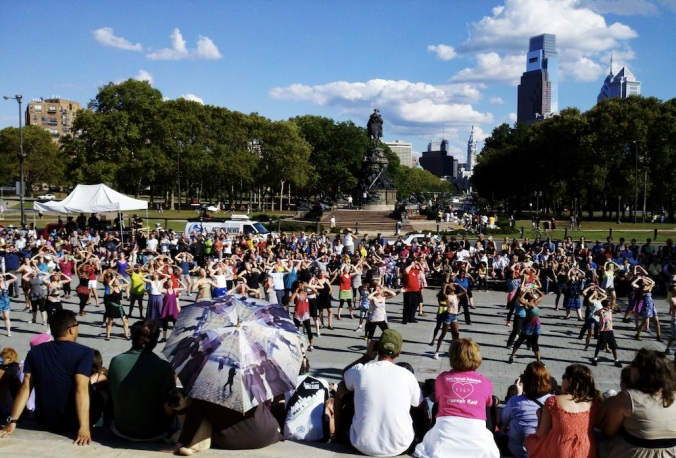 Yesterday, I got the chance to see the unofficial opening ceremony for Philadelphia’s annual Live Arts Festival and Philly Fringe. The piece is called Le Grand Continental, and it was a large, 155-person, half-hour-long group dance, choreographed by Sylvain Émard Danse and performed on the front “Rocky” steps of the Philadelphia Museum of Art. It was phenomenal (the Inquirer had a great review of it as well).

The piece explored the themes of unity, life, discord, speaking out, disillusionment and youthfulness. It had dancers from nearly every imaginable age group, ethnicity, and income level (including, I could swear, Black Thought, the lead MC of The Roots–but I could be wrong). It was amazing seeing such diversity move in concert with one another.

But, either way, the piece has been done and if you haven’t seen it then you’ve missed it, so my main purpose here is not to rub that in, but instead to promote the Live Arts Festival that this piece sort of kicked off.

Every year (for the past 16), for three weeks, Philadelphia plays host to (literally) hundreds of events and performances that represent the cutting-edge of contemporary performance art. There’s a strong focus on experimental pieces in dance and theatre especially, that try and push the boundaries between form and content, performer and audience, and new and old.

Many of the events are free and they are scattered throughout the greater city area, and so it’s always a good excuse to explore a new area of the city to which you haven’t been before.

Some of the best pieces of performance art I’ve ever seen have been during this festival the past couple of years, so I can’t emphasize enough how good of a use of your time and money this festival would be to anyone who lives in the city, or is visiting during this time.

They have a great website and brochure that outlines all the performances, times, places, prices, etc.

I hope to see many of you there!