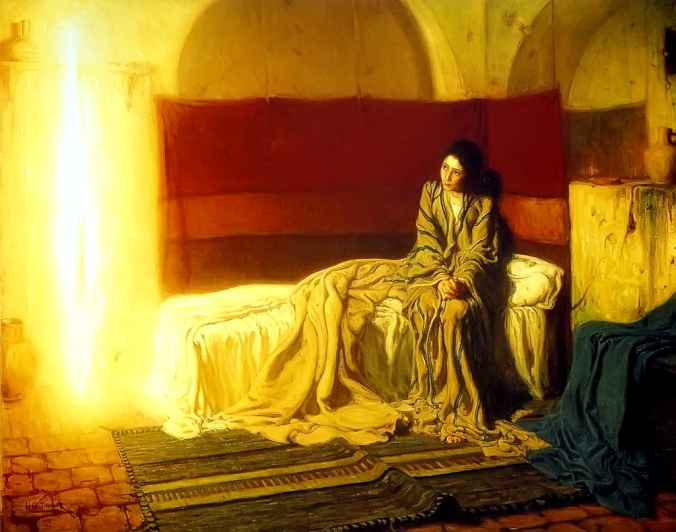 This Advent, we’re seeing how this season affects parts of our lives we usually don’t associate with it. Follow the series here. This post is also filed in the series “Catholics Aren’t Crazy” and “Women Leading Stuff in Churches“.

If a woman is revered by the church for giving the faithful their savior, then surely women are good enough for leadership roles in the church to save it. –Vishwanath Ayengar

I ran across that quote in some letters to the editor of Newsweek a couple of years back in response to a cover story arguing that if women were ordained as priests in the Catholic Church, there wouldn’t have been any sex abuse scandal. I don’t know if that’s true, but the quote is insightful and (hopefully) thought-provoking.

I can hear conservatives now: Well, God used a donkey to speak! He used Caiaphas the high priest to unknowingly prophesy about Jesus before sentencing him to death! He used Judas to bring about Christ’s crucifixion and therefore our salvation! It doesn’t mean that they were fit to be ordained pastors!

Yeah, yeah, I get it. This post isn’t necessarily meant as a “proof” or “defense” of women’s place in ministry (though it’s a part of my on-going series on the topic). I just want to revel a bit in some divine mystery. Can we all just put our swords down and marvel?

One of the beautiful things about Catholic theology, and why it often differs so much from Protestantism, is that one of its main interpretive filters is that of story.

Protestantism, on the other hand, has often been obsessed with what’s called “historical-grammatical exegesis”, meaning that the “proper” interpretation of any given text must be the result of getting as close as possible to the original historical context and grammatical understanding of what those words would mean to the original recipients. Further, that meaning must be rooted in the text itself, and not arise from some extra-textual principle applied to the text (like allegory, narrative, etc.).

The problem with only (or even primarily) looking at it this way is that this is not how most of the Old Testament writers, Jesus, the apostles, the early church, nor most of church history have ever treated the Bible. They were and have been much “freer” with the text (yes, many times to a fault). Catholicism’s rootedness in interpreters of old often invites them into other ways of treating the text, and this brings them to many different ideas than Protestants.

For example, Catholics would talk up the “holiness” and “purity” of Mary by drawing a beautiful parallel between Mary, the Ark of the Covenant, the Tabernacle, and the Temple, saying that they all carried the Holy of Holies within them in order to protect it for God’s people. They would point out how much reverence is offered to these other “shadows” of which Mary is the fulfillment.

Protestants would hear that and ruin the beauty of the moment by crying out: “The Bible never says that! Where’s your verse to prove that?!”

But just for a few moments, can all of us Protestants just stop proof-texting and having knee-jerk reactions and sit in some beauty and mystery when it comes to Mary and Advent?

Throughout the Bible, there is this consistent idea of the “Three Offices” of Authority among God’s people: Prophet, Priest, and King. Through the New Testament (especially in the book of Hebrews), Jesus is declared as the fulfillment and highest expression of each of these offices. But, in the Advent event, you can sort-of see Mary doing this as well.

Jesus is the “Word” of God. He is the divine logic of the Universe through whom the world was made and through which God has made himself known.

A biblical “prophet” is not someone who tells the future; it is simply someone who speaks the words of God with divine authority. What made a prophet legitimate was not necessarily their own goodness or even their trust in God, but rather the legitimacy and truth of the Word itself that God had given them.

This Word found its truest and most authoritative expression in Christ Himself. That’s why prophets’ words were often (but not always) about the future: because the True Word behind their prophecies was still yet to come.

The usual prophetic formulation was the phrase “thus says the Lord“. Biblical prophets claimed a divine origin and “conception” for the Word they “delivered”. (I think you see where I’m going with this.)

If Jesus was the Word of which the former prophets’ words were only a shadow, then Mary herself was the truest and most literal human prophetess: having the True Word of God conceived within her by divine decree, she then faithfully delivered it to the world.

The legitimacy of her Prophetic office is testified by the fact that she delivered the truest and highest Word of God.

She was the prophetess that all other prophets were anticipating.

(As an aside, it’s also interesting that the only other person described as being in the office of “prophet” in the entire Advent story is another woman, named Anna.)

Priests served several functions  for God’s people. Primarily, they were servants of God, set apart to care for the material and spiritual needs of the people and prepare the ritual sacrifice for their sins. Priests had no land, for God himself would be their inheritance.

Mary is blessed by God, and God is said to be “with” her, both in favor as well as his actual Spirit being in her. God says that he has set her apart for this service and gives her Himself (literally) as her inheritance for her faithfulness. She responds by boldly taking on the title of servant. One could call this Annunciation scene (pictured above) as Mary’s Priestly ordination.

She goes on to give birth to Christ and, just as the priest would do with the sacrifice, she performs dedication and purification rituals on the baby Jesus at the temple (I have meditated on this scene before).

Further, when old Simeon sees this and begins to sing, he says: “my eyes have seen your salvation, which you have prepared in the presence of all peoples”. “Prepare” is an interesting word choice. “Preparation” is what priests would do to the sacrifices at the temple. Years later, when this foreshadowing is completed at the cross, Mary is right there, watching the sacrifice take place.

Further, even more literally, Mary cared for the material and spiritual needs of the “body” of Christ. The Church is later described as having been joined to this very body of Christ, and it is this body that is broken week in and week out at the Table.

This is the very same body that Mary, as a priestly servant of the Lord, poured herself out to care for, to nourish, and to respond to the needs of.

Yes, I know, that heading is a little off-putting. Remember, these are “offices”, not in some big, other-worldly cosmic sense, but in a very human practical sense. They are ways that authority is exercised among God’s people. I’m not implying that Mary is a “queen” of Creation itself or rules and reigns as a “queen” for all time–only that there is a type of earthly authority usually exercised in the human office of “King” that is most truly expressed in the life of Mary.

How so? Well, the real question is: what does it mean to “truly“ exercise King/Queen-ly authority among the people of God?

In Jesus, the way in which royal authority is expressed is redefined. It is not lording over subjects, but rather lowering oneself and emptying oneself on their behalf. When Jesus says in the garden “not my will but yours be done”, and when Mary says “Here am I, the servant of the Lord; let it be with me according to your word”, they are both speaking expressions of authority as Christ has redefined it in the Advent event.

The earliest known hymn to Jesus, found in Philippians 2, has parallels to Mary’s own song, called the Magnificat. In the same way that Jesus empties himself and is therefore highly exalted, Mary empties herself and then says she will be exalted and blessed by generations of believers to come.

In Mary’s Advent response and song, we see how true, godly, royal authority is faithfully exercised by human beings.

Okay, I know that stuff was a little out of the usual bounds within which people usually talk about Mary and the divine offices.

Don’t worry. I’m not laying out my “doctrine of Mary”. There are no “proof texts” for any of this, and I’m not even saying that this is necessarily what I think is the case–or at least to the point that I’d argue with someone over it. It’s a just a potentially beautiful state of affairs that I could see being true. It’s a silent space in the Mystery and Providence of God that there might be some awe.

Just to be clear, I think Mary was an absolute human being: born with a sinful nature, full of doubt and sins, who had other kids, and was not a “co-redemptress” with Christ.

But in saying that, I don’t want it to sound like I’m thinking less of Mary. In fact, the more human one considers her, the more incredible her faithfulness and obedience was and is. Further, the more human she is, the more of a model she can be for us in how we can “live out” those divine offices amongst God’s people.

So may we each look to Mary this Advent season; and in her obedience and faithfulness, let us see how we might deliver God’s word, care for his Body, and exert our God-given authority in ways that resonate with that most blessed of women.

And now, for Pete’s sake, let’s start ordaining women to leadership offices in the church! (Okay, feel free to pick up your swords again.)