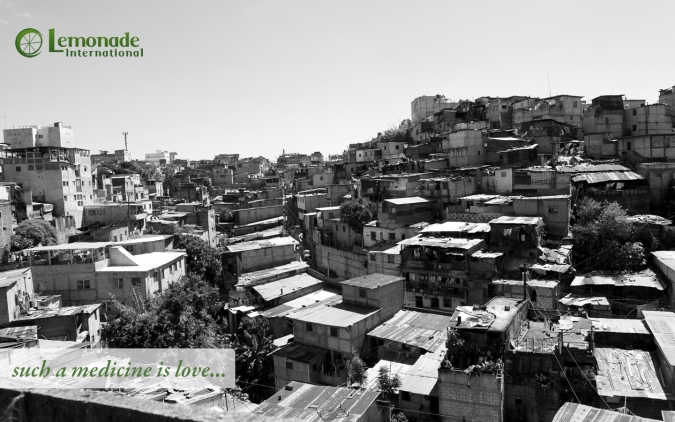 Yesterday, I touched down to begin my week in Guatemala on a blogger’s trip with Lemonade International, a non-profit development organization doing work in a particular called La Limonada.

This community of La Limonada is the largest slum community in Central America. After the 36-year-long Guatemalan Civil War began (due to an American coup to overthrow their leader), many, many children and women lost their fathers and husbands to fighting, leaving this huge community of hurting people. Many, many of the refugees ended up in La Limonada.

This community is a 1-mile long stretch that is a half-mile wide and straddles a ravine. 60,000 to 100,000 people live there. It is considered a “red zone” by Guatemala, meaning that deliveries, police, and most outsiders in general don’t go in there. In the boundaries of the “zones” of Guatemala City, La Limonada is between two different zones–it doesn’t even have a place in the official boundaries of the city.

It’s literally been abandoned and marginalized by the very nation in which it resides.

School days are only half as long as the wealthy areas and are only free until 6th grade. The local delinquent crime groups act as the “police forces” of the ten barios (neighborhoods). More people die violent deaths now on a daily basis here than at any point during the Civil War.

In the mid-90s, a local Guatemalan woman named Tita Everetz began meeting with gang members and serving the community. Her church and the culture around her tried to convince her not to go. But she did.

Over time, she realized that many of these gang members, had they been reached and loved when they were younger, could have been saved from the cycles of violence that entrap so many of those here. And so, she began a school, to try and break the cycles.

In 2008, Lemonade International was founded as American support wing for for the work being done in La Limonada. It does development work down in five main ways:

And though they do this work which is similar to work done by other non-profits in the world, I’ve never seen an organization so doggedly committed to using these things as mere means to foster long-term relationships and deep healing in such a particular, well-defined community.

Ultimately, this is about healing and relationships, not simply economics and education.

This is not a mission trip

For this week, Lemonade International has asked me and four other bloggers from around the country to join them for a week, observe their work, share this work on our blogs, and enable people to connect to the amazing things they are doing down here.

But this is not in any way a “mission trip”. This past week, I finished Geography of Grace:Doing Theology From Below, a book that has formed much of their organizational philosophy. In it, the authors write of their own work in Guatemala City:

“[We] regularly host groups of North Americans on what we call ‘vision trips’ in hard places around the world. In contrast to a ‘mission trip,’ which centers on what an outsider comes to ‘do’ in a foreign country or another culture, a vision trip focuses on the invitation for an outsider to come and ‘see’ what God is doing through grassroots leaders serving their own people. Well-crafted encounters and targeted theological reflection enable visitors to re-imagine and broaden their understanding of life and mission—they become students of God’s activity in a foreign country or another culture. Vision trips liberate ‘mission’ from incarceration to the limitations of a program or the responsibility of a select committee in a church. The goal is for mission to become a lifestyle.”

I look forward to having you all follow me on this vision trip. I hope you are all are able to share my sight this week as I grow, change, and am challenged. I also hope you consider joining Lemonade International in their work.

Ultimately, the more I look into the work being done here, I see so clearly that God is here among these people. His grace is evident in this lowest of places. I need them. Because in  them, I will see and meet God. And that is really why I’m here.

6 thoughts on “Why I’m in Guatemala: Meet Lemonade International”