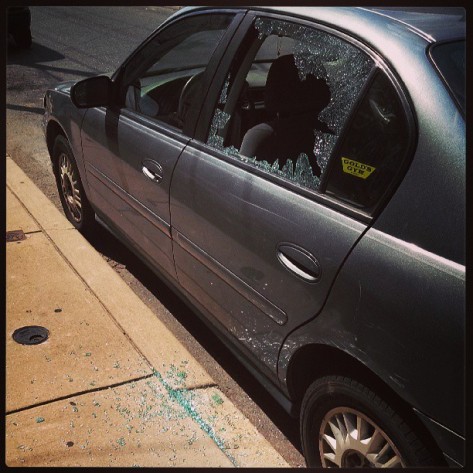 Yeah, that’s my car there in that picture. This afternoon, my car got broken into.

But I’m getting ahead of myself. This was one the oddest days I’ve had in a long time.

Every day this week, mainly for work reasons, I’ve had to get up anywhere from one hour to an hour and 45-minutes earlier than I normally wake up. I’ve also been staying up later than usual all this week. I have been a zombie, for sure.

This morning I had to wake up crazy early (to me, at least) to pick up a client and get them to court for a domestic violence case. They had been the one abused, and they were to testify. This is one of the most difficult things for abuse victims and support was definitely going to be needed.

We walked in and the court was packed, standing-room only. They went through all the cases once to sort out who was there, and then began moving forward on each case, slowly. As they went through each case, I realized that this court on this day had been set aside for all of the partner violence cases. We ended up being the last case called.

And so, I had the privilege of spending nearly fours hours hearing story after story after story of men beating the crap out of the women in their lives, and at least one implied lost pregnancy due to the abuse. One charge of “Violence with an instrument” (or something like that) had to be dropped against this especially brutal ex-boyfriend because he had hit the victim with a baseball bat so hard, she lost all memory of him picking up the bat and swinging it in the first place. With no ability to recall this and testify to it, the charge had to be dropped (there were still plenty of other charges left, thank goodness).

After my client testified boldly and I told them I was proud of them, they broke down outside the court room and I had to comfort them. I had to speak words of dignity, peace, self-worth, and love to a person whose idea of all those things had been so violently shattered.

I finished up work, took the bus to my car, and drove it around to the front of my house. I went inside and began getting ready to go see the musical Wicked with my girlfriend for her birthday. I walked back out and saw the above image right in front of my doorstep.

The window had been smashed in and my beautiful Guatemala bag was taken. In it, I had my new-ish tablet/laptop thing that I had just purchased because it was lighter than the old Macbook I’m currently typing on. I had a Moleskine that had notes of many different kinds from the past few years strewn throughout. I had an amazing book that I was about 20 pages from finishing (grrrr). I also had the usual assortment of pens, phone chargers, and paperwork that also accompanies such a bag.

And I was fine. It didn’t really affect me much. (I was honestly mostly frustrated about the book I can’t finish!) I wasn’t (and still am not) angry, frustrated, or even feeling like some major injustice was perpetrated upon me.

I made the police report, called my insurance, made an appointment to fix the glass tomorrow, and called Staples inquiring about my extended warranty on the computer (it’s still unclear how that will play out–but it’s promising).

M girlfriend then came and picked me up and we went to the show. And it was breathtaking. And wonderful. And enjoyable.

And now I’m home, and it’s just been a weird day. I don’t have any formed conclusions or profound thoughts in light of this, but I’d like to offer you some disjointed musings.

After the car theft, I thought about how the person(s) that took the bag might have spent their evening. With my job and such, I think I have a realistic estimate of what their life might look like, and contrasting that with me getting dressed up and dropping money on seeing a musical with my girl feels strange.

At the same time that I was absolutely calm and kept thinking that all the stuff from the car was “just stuff” (as if I’m not materialistic at all), I continued writing and googling things on my other, second laptop, and one of my two smartphones, before seeing an expensive show and paying for parking.

I spend my days seeing the institutions and addictions that often drive people to these sorts of actions, and I understand. Given a different set of circumstances, parents, or skin color, I might be there too.

I mused at the silliness of this crime. With all the passwords and such on people’s electronics nowadays, why do people steal them all the time? What’s more, why do people purchase these stolen things? My computer is not only inaccessible to someone without the password, but I still have the charger at home that can only work with that computer.

It was an absolutely useless crime. There was nothing of value to them in there, and most of it probably just ended up in the trash. So what was the point of this, then? Just an attempt to feel powerful in a world and system that robs one of their dignity and agency? If so, I get that.

In court all day, I saw people who have records for these kinds of theft come before the same judge again for their case today. I was reminded that those that have this as a lifestyle still have things catch up to them.

I imagined this individual. I wondered if they were genuinely a “bad person”, or if they are on the road to getting things sorted out in their lives, and this theft was just a hiccup in that process. If it was the first option, I was confident they’d keep doing things like this and eventually get in jail. If it was the second, then I was genuinely okay playing whatever bit part in their own story of change, growing up, and possibly redemption.

I don’t think that my resignation to this or understanding here is self-immolation over some sense of “white guilt” or anything. I don’t think I “deserved” this crime. It sucks. A lot. But hopefully, it’s more a result of perspective than guilt.

Either way, I’m still okay. I’m not worried about these items, even if I end up out a lot of money.  It’s just stuff.

And I don’t know when my heart started believing that, but it has been incredibly encouraging to me to see my response to this be one of rest and humor. I honestly did not see that coming, and it’s only a reminder to me of how the grace of God works.

Update: The morning after is here. I have since slept on this, and remembered that the watch one of best friends gave me for being his groomsman a few weeks ago was also in that bag. I find myself caring a little more and being more frustrated today than yesterday. Haha. Pray for me and my fickle heart.

How do YOU anticipate you’d act in the kind of situation? How DID you act when this actually happened if it ever has)?