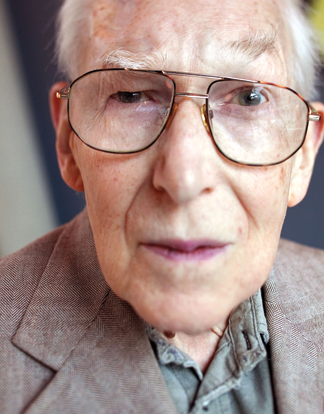 I just have one more thing to post in this little series on my charismatic sensibilities. Yesterday, when writing about praying in tongues, I quoted from this long piece that J. I. Packer (the spry man to the left) wrote evaluating the charismatic movement as a whole. It’s a heavy article, but if you get to his conclusions, they are very interesting.

Packer is a Reformed Anglican, and believes that the “sign” gifts (the “extra-crazy” works of the Holy Spirit) have now ceased and were only used for a time to “get the church going” as it were. (If it weren’t clear, I think this designation of “sign gifts” is incredibly arbitrary and I think you have to twist the Bible backwards to prove that these things simply stopped at some point in time. I think they are still very much with us, however neglected they may be.)

But still, he is incredibly gracious to the charismatic movement and sees it as a legitimate expression of God’s people seeking a greater communion with him, and even believes that they need to teach the old Reformed fuddy-duddies (is that how you spell that?) a thing or two. I found his comments particularly on tongues especially delightful, and I thought it would be a fitting post-script to these posts I’ve been writing on my own charismatic side. The paragraph breaks in this quote are my own, for ease of reading.

Charismatic glossolalia [the theological term for speaking in tongues], a chosen way of non-verbal self-expression before God (chosen, be it said, in the belief that God wills the choice), has its place in the inescapable pluriformity of Christian experience, in which the varied make-up of both cultures and individuals is reflected by a wide range of devotional styles.

It seems no less clear that as a devotional exercise glossolalia enriches some, than that for others it is a valueless irreverence. Some who have practiced it have later testified to the spiritual unreality for them of what they were doing, while others who have begun it have recorded a vast deepening of their communion with God as a result, and there is no reason to doubt either testimony.

Those who know that glossolalia is not God’s path for them and those for whom it is a proven enrichment should neither try to impose their own way on others, nor judge others inferior for being different, nor stagger if someone in their camp transfers to the other, believing that God has led him or her to do so. Those who pray with tongues and those who pray without tongues do it to the Lord; they stand or fall to their own master, not their fellow-servants; and in the same sense that there is in Christ neither Jew nor Greek, bond nor free, male nor female, so in Christ there is neither glossolalist nor non-glossolalist.

Even if (as I suspect, though cannot prove) today’s glossolalists do not speak such tongues as were spoken at Corinth, none should forbid them their practice; but they should not suppose that every would-be top-class Christian needs to adopt it.

4 thoughts on “Postscript: J. I. Packer’s Helpful Evaluation of Praying in Tongues [QUOTE]”