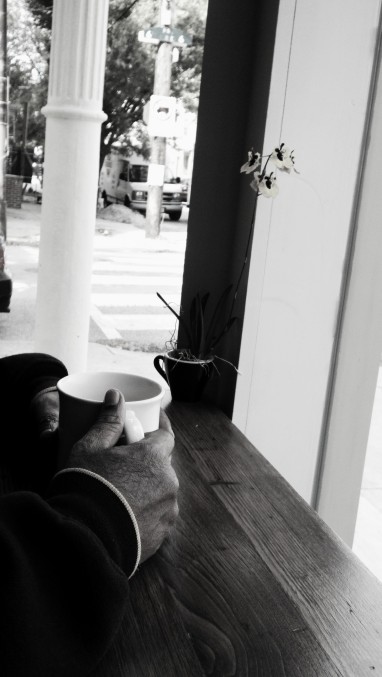 I know, I know. One of the worst types of writing there is in the world is a white person writing about their discovery that they are privileged and this is deeply engrained. I know. This post isn’t that, I promise. Just stay with me for a little bit.

Having worked in social work for a little over five years now, I’ve grown in my understanding that racism is about a whole lot more than individuals feeling an active, conscious dislike of someone just because of their race. It’s structural, cultural, political, economic, and systemic.

(Still, I’ve really missed this at times, and old habits and ways of thinking die hard. I’m really, really sorry for that.)

Recently, I had the honor to speak at one of my church’s ministries for those in homelessness. Afterward, I walked around saying hello to the almost-exclusively black crowd there. As I made eye contact with different people, I would offer a smile to them and give them as warm of a look as I could. I did really feel a genuine warmth and love for this group.

And yet, I started feeling this…thing…within me. As I gave my smiles away to the crowd, I realized that this was a problem. I was giving my smiles to them. Something in me felt as if I, as a privileged white male, was “serving” these people by “granting” or “bestowing” upon them affection. Does this make sense? Do you see the problem?

Inherent in that posture is a deeply-engrained power dynamic. It still assumes that the flow of “worthiness”, “affirmation”, and “positivity” flows from me, the privileged white male, down to those without power and privilege.

Now, I don’t know about you, but where I grew up, “not being a racist” was simply defined as doing what I did in that moment: expressing to minorities a positive rather than negative sentiment when you come across them. But that idea has so many problems.

First, it places racism entirely at the level of individuals, therefore ignoring institutions and systems. Therefore, that way of looking at it does nothing to mobilize us against those things. Second, it “whitewashes” one’s experience with race, making it more about how the privileged one gets to act towards the other rather than having a posture of listening, deferring, and receiving. In the end, it’s still all about the whiteness.

And lastly, and the thing I felt most tangibly in that moment was that it perpetuates the power dynamics that lend themselves to the systems of injustice in the first place. It is patronizing and patriarchal. It is whiteness saying that it will bestow to blackness an affirmation and delight it does not inherently possess.

If you’re still tracking with me at all, what might we do to overcome this? How do those in privilege relate in positive ways with those that are marginalized in a way that doesn’t perpetuate systems in which the privileged “give” them power (as if they didn’t have it already), “bestow” upon them affirmation (as if they needed it), or “grant” them recognition (as if whiteness is the default standard of our understanding)?

At least for me, I think I found a little practical thing that has been immensely helpful.

After that morning at the ministry, I went to a coffee shop really angry at myself and what I was noticing in me. I spent much of the afternoon going on an online rabbit trail, starting with this amazing series of blog posts my Urban Church Planting professor had given us to read. Eventually, as I clicked and read my way through these posts on power, race, black theology, liberation, and privilege, I ran across this section in a phenomenal article by Andrea Smith:

Surely, especially if you take out the “racialized” part of this, most everyone can agree that, yes, most modern selves think this is how their identity is created–by their own self determination. And also surely, if we give this some more thought, most of us would agree how wrong this is in reality. Even from a purely secular perspective, biology, neuroscience, psychology, sociology, and political science show humans to be radically relational and that there is no such thing as a “self-determined self”. Even more so, as a Christian, we have to utterly reject this way of understanding ourselves. What’s the alternative?

[This] analysis implies that “liberation” would require different selves that understand themselves in radical relationality with all other peoples and things.  The goal then becomes not the mastery of anti-racist/anti-colonialist lingo but a different self-understanding that sees one’s being as fundamentally constituted through other beings.

As I’ve said before, who we are arises from the spaces between us, not the space within us. We become who we are as we relate to others (and, in my view, God).

And so, the thing I’ve started doing that has been so helpful is this: as I’m walking around my neighborhood, going into my job, or serving the marginalized and less privileged, instead of approaching them with the unconscious thought, “let me give them something I have that they don’t”, I consciously think to myself before each interaction, “I need them in order to be who I will be. In this interaction, we’re going to both become more ourselves.”

Seriously, I think that. And you know what? It really has changed my posture in those moments. The smile is less cheesy, and yet the connection is more real. Rather than giving them something in that interaction, I’m recognizing something that’s there already, and I’m letting it affect me, constitute me, recreate me.

Now, it needs to be said that the war for liberation from these power dynamics is not only, or even mainly, about how individuals relate to each other. It’d be too easy for us in privilege to focus all our energy on that and ignore the structures, institutions, and systems that perpetuate this, all while patting ourselves on the back. And so, however helpful it is to adjust how we think through all this, let it be a means to a greater societal and structural end, and not an ends in and of itself.

I don’t quite know if this is what St. Paul had in mind when he said “transform yourself by the renewing of your mind”, but at least for me, it sure does feel like it. I hope you find it too.