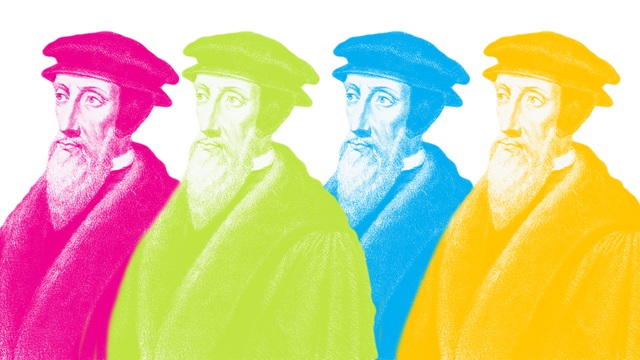 UPDATE: I’ve finished this little blog series. We talked about a book, the history, and T–U–L–I-P. Enjoy!

[As our book club is going through Richard Mouw’s Calvinism in the Las Vegas Airport, I’m blogging some of my thoughts.]

If you have any sense about Calvinism, its reputation, and what it believes, you probably know that it is not especially popular. Contemporary Calvinists nearly always fall into one of only two camps: irritating, uncharitable jerks that are unapologetic for their Calvinism; and kind, warm people that too apologetic about it. In other words, you have the “damn right, I’m a Calvinist” crowd, and the “I wish I wasn’t a Calvinist, but it just makes sense to me” people.

Depending on my coffee and/or alcohol intake, I can be either one. But I definitely think (and hope) I lean more towards the latter.

I started out my Calvinistic journey in college as I sat under a sermon miniseries on the topic that utterly convinced me of the truth of the doctrines. I’m going on over a decade now having sat with these beliefs and (in my opinion) truths, and I’ve watched then morph and shift over time in my soul.

I definitely began the journey as the arrogant, tight-fisted, dogmatic Calvinist that generally annoyed anyone that didn’t agree with me. I also hurt a lot of suffering people. I acted in good faith, thinking that changing the doctrinal minds of others would unlock such joy and security in such a big God. Sometimes this happened. A lot of times it didn’t.

Yet such is the theological life. Theology that is not embodied and walked out is theology that has not yet been “believed” at a very real level. We often spend our lives inhabiting truths before we ever internalize them.

In my last post on this, I talked about some disadvantages and difficulties that Calvinism’s history presents. Because of the time and culture in which it emerged and was systematized, Calvinism gained some structural weaknesses that, just like my own experience, could only be worked out and reframed in time. Calvinism needed to be embodied by peoples and communities that had different concerns, epistemologies, experiences, politics, and stories in order to stretch it, try it on, and adjust it.

Lucky for us, it has worked its way into other cultures and communities and has gained more nuance, perspective, recontextualizing, and some “tweaks”, especially in the past 100 years or so.

Unfortunately, however, the more popular and reductionistic conceptions of Calvinism (including by many of its adherents) are still stuck in the 17th-century. So much has happened in Calvinistic thinking since then that can serve to make it more comprehensible to us today.

Having sat with some of these “re-articulations” in my own soul and in the teachings of others, I’d like to spend the next few posts going through the traditional “Five Points of Calvinism”, using the historical acronym TULIP,  proposing some tweaks to the common ways we go about framing this system of belief. Today, we’ll look at the first “point”.

One problem with traditional TULIP is that it tries to do too much with too little. It is fundamentally a human-centered framing. The starting place for the whole system is humanity’s “total depravity”. This is wrong on nearly every level. The Bible, The Gospel, the historical Creeds/Confessions, and even John Calvin’s own theological thinking refuse to begin here.

God in Christ is and must be our starting place as Christians. We look at Jesus, who he is and who he shows God to be, and then go from there to see how we are reflected in the light and work of Christ.

And when we do this, we surely do see that there is deep brokenness and a dark power within us that seems to touch every human faculty. And yet, what we see in Jesus is that his orientation towards us is as people of infinite worth.

How much is humanity worth? What value does the Godhead place on humans? The answer: The highest, greatest Good in all of reality—God himself, in Jesus. That is our worth.

Yes, we are totally depraved, but this seems not to have entered into the equation of Jesus’ sacrifice at all. If you asked Jesus why he did what he did, his answer would not be, “because they are depraved.” But it would be “because I love them”,or “because they are mine, I want them, and I will give whatever I must give to have them”.

The opening line of John Calvin’s Institutes of the Christian Religion says, profoundly, “Without knowledge of self there is no knowledge of God.”

Humans, therefore, surely are depraved, and this depravity surely has touched every part of who they are—body, soul, heart, and mind. And yet, the human person is at the time of such beauty, dignity, goodness, and fullness that God’s own life is as near as breath and thought to them. As we look into the deep chaotic waters of our hearts, we will see the Spirit of God hovering over the waters of the deep, ready to bring new life.

Suzanne McDonald speaks about the view of the famous 17th-century Calvinist John Owen, who perhaps began the “reframing” movement of Calvinism: “In summary, human beings are for Owen the creatures uniquely able to represent the righteousness, holiness, and love of God in and to the world.” This is our nature and glory.

Similarly, the theologian probably best know for redefining Calvinism, Karl Barth, says that human “mistakes and confusions and sins are only like waves beating against the immovable rock of his own proper being”–an inner being which is marked and defined by God’s beautiful and good image being imprinted within us. That is the defining, immovable rock of our souls. Not our corruption and weakness.

But probably the best and clearest summary of all this is by theologian and therapist David Benner, when he says, “to be human is to have both feet of clay and divine DNA”.

That captures beautifully a more nuanced, complex conception of our Total Depravity in Calvinism.

6 thoughts on “Calvinism: A (Humble) Proposal for Some Tweaks, pt.1”