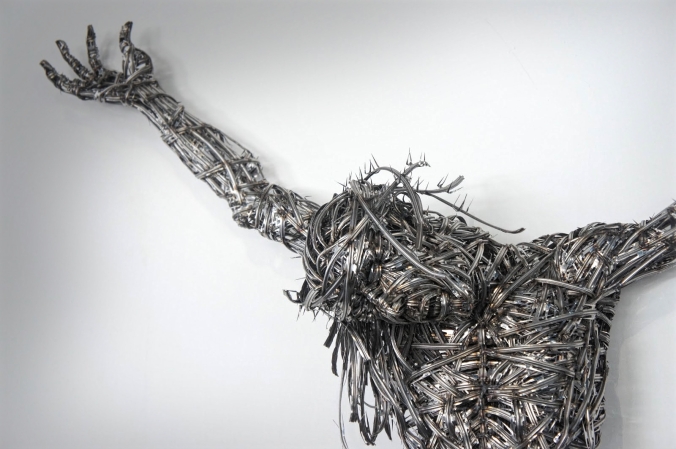 UPDATE: I’ve finished this little blog series. We talked about a book, the history, and T–U–L–I-P. Enjoy!

I recently offered some proposals on some “less intense” (yet still Reformed) articulations of Calvinism (see above). Today, we embark on the most controversial of the “points” of Calvinism: Limited Atonement.

This is the most difficult of Calvinism’s points, but it’s also its most logical. The least charitable way to summarize it is thusly: Jesus only died for Christians and not others. The more charitable way: No drop of Jesus’ blood was shed in vain; God accomplishes what he sets out to do, and Jesus’ death is effectual to save all whom it is intended to save.

Therefore, the belief is that Jesus’ atoning work on the Cross was “limited” to cover only the sins of people that would become Christians. So how do we move forward? Because after all, there seems to be only two options here concerning Jesus’ work on the Cross: Limited or Unlimited? Particular or Universal? “all who will” or “all who may“?

How can we approach this in a more winsome and erudite way while still calling ourselves Calvinists? Or more importantly, how can we balance God’s initiating power and sovereignty with his universal love and longing that all may be saved?

First, Atonement is NOT Salvation

This is really important. In my last post, I pointed out that God’s Election is more about our life here-and-now, and less about our future eternal destiny. The same can be said of Atonement.

Christ’s atoning work, when applied to you, brings you out of Exile and into God’s Kingdom, where you can then extend this grace and God’s salvation to others. Atonement, in other words, establishes the people here and now that will prepare this world and God’s people for the world to come.

In the end, Limited Atonement is a struggle between the universal and particular. We see God emphasize both through Scripture. But as British theologian Lesslie Newbigin reminds us, God has a consistent pattern: the one (or the few) is chosen for the sake of the many; the particular is chosen for the sake of the universal, not instead of or in spite of them. (Scholar Richard Bauckham makes a similar claim in this profound little book.)

So when thinking through what is happening on the Cross, whether it is universal or limited, we must remember it is mostly about constituting a reality here in the present age, and only secondarily securing something for our future.

Atonement being limited is an act for the rest of the world, not against it. But why?

Scholar N.T. Wright has a book out on this topic of the Cross and Jesus’ atoning work. I haven’t read it yet, but I’ve read and heard some interviews based on the book, and I find his thesis compelling:

[The Cross is not about] a “works contract,” a celestial mechanism for transferring sins onto Jesus so that he can be punished and we can escape, but because of the “covenant of vocation”—Israel’s vocation, the human vocation, Jesus’s own vocation—in which overflowing love… overflowed finally “to the uttermost” as he was lifted up on the cross to draw all people to himself.

The Cross is about addressing our failure to live out our “Vocation” as humans. This means that “Sin” cannot be reduced to “doing bad things” or going against some seemingly arbitrary and arcane divine legal code. Rather it is when we refuse to be the self-giving human beings God has called us to be. When we move against this Divine call and design, it brings chaos and (in Israel’s History) Exile. Another Wright quote (emphasis added):

Humans were to be saved not for “heaven” (Paul never mentions that as the goal) or simply “to be with God forever” (that, though no doubt true, was not the point), but for the new creation. [Our vocation, then,] would be attained by means of the death of Jesus, through which the powers of sin and death were defeated….Jesus, representing Israel and the world, took upon himself the full force of the divine condemnation of Sin itself, so that all those “in him” would not suffer it themselves.

So whatever we think about Atonement and its limitedness, it’s primarily about our spiritual vocation and how we ought to live our lives now. We are to be, as one scholar calls it, “A Community Called Atonement”. Atonement is limited to those who would carry on Jesus’ vocation, taking on the sin of others, becoming a place for God’s atoning work to be applied to others.

To put it simply, the Cross is sufficient to atone for all sins, but it is not effectual and applied to all sins. As Newbigin tells us, salvation does not come from the clouds above, but is passed on neighbor to neighbor; it goes through doors, not skylights.

Traditionally, Calvinism says that Atonement is “Limited” to “the Elect”. But Swiss theologian Karl Barth reminds us (as I talked about in our last post), that Jesus Himself is both the Elector and the Elected. Kimlyn Bender summarizes this well  (emphasis mine):

God chooses and works on the basis of entire peoples, not mainly individuals. And foremost amongst his choosing and working is Jesus–the one that became a curse for us, whose Resurrection was his vindication of the sin he bore in himself on our behalf.

In the first place, then, Atonement is “Limited” to the Elect Jesus and is only by extension and spiritual union applied to us. We are only part of that “Limitedly Atoned-for” people insomuch that we are “in” and joined to our Atoned-for representative, Jesus.

So when we think of Atonement’s “limits”, we ought not think of a limitation of quantity, but of quality. Barth himself says,

We cannot…make the open number of those who are elect in Jesus Christ into a closed number to which all other men are opposed as if they were rejected. Such an assumption is shattered by the unity of the real and revealed will of God in Jesus Christ.

Atonement was limited to a particular people not particular persons. The Doctrine of Limited Atonement is not meant to delineate between the “in” and “out” crowds. It’s meant to say that God has a purpose for redemption and a people through whom he will accomplish it. Atonement is a realm in which people inhabit, not a little spiritual token they receive.

To put it as bluntly as possible: Atonement is limited to a specific people, within which is an unspecified number of persons.

What was being “atoned for” on the Cross was Sin and Death itself (with capital letters!), and not our individual sins. Jesus’ death and resurrection broke the power of Sin and Death, which kept God’s people in Exile. In that sense, Atonement is universal; it is cosmic; it is total. Wright again:

At the center of the whole picture we do not find a wrathful God bent on killing someone, demanding blood. Instead, we find the image—I use the word advisedly—of the covenant-keeping God who takes the full force of sin onto himself.

On the Cross and Resurrection, God is doing a cosmic and covenantal work. He is working on the macro level. When we turn “Limited Atonement” into a game of numbers and view it through a “micro” lens, we miss out on the beauty, security, and largeness of God’s work in, for, and through us.

If we  look deeply at the Cross and Resurrection, we see a God obsessed with breaking the cosmic powers that hold back New Creation and his Kingdom. Believing in Limited Atonement means that we believe in a God who has acted decisively, pointedly, and comprehensively against all Sin so that his Kingdom could come, and his will would be done, on earth as it is in heaven.

And it shall be so.