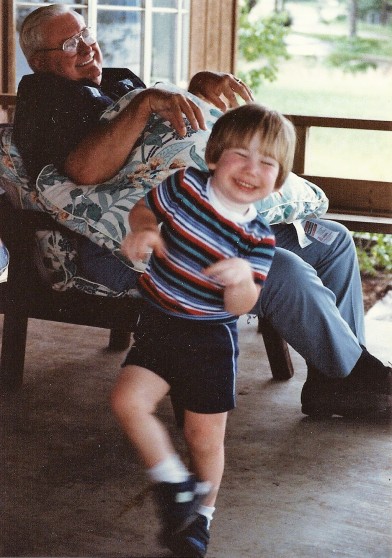 Today is the sixth anniversary of my Grandfather’s death. I am reposting this reflection I wrote at the time.

This past Sunday, the day after Christmas, I watched my grandfather die. This is the first death I’ve experienced of someone very close to me. I’ve known people who had died, sure, but no one as close as this.

This man walked with me and I with him for my entire life. I sat on his knee and was tickled by his hands. I grew up hearing legends about him, and I walked in a general sense of awe and disbelief when in his presence.

His name was (is?) Lester Travis Williamson, or as I knew him for most my life: Peep (a mispronunciation due to the first grandchild’s toddler lisp).

Peep represented for me a tenacity and determinedness of love that great stories of tragedy and triumph are built upon. As their old pastor said during the funeral, he was a man that if you asked for a crumb would give you the entire loaf and then chase you out the door to give you another loaf for the road.

But this is not to be confused with the contemporary pictures of the sentimental, gratuitously giving man–cheerful, talkative, jocular, and always-optimistic. If Peep was anything, he was the quintessential man of his generation–America’s vision of a “real man”–quiet, determined, and strong. He spoke with intention in every syllable, meaning what he said and saying what he meant.

When I was younger, my youth group friends and I would hear about the death of an older member of our Southern Baptist Church and we would be confused how in one breath, men and woman of God could extol this person’s faithfulness, and in the next breath express such sadness over their passing. We frequently said: when I die, I don’t want people to be sad! Heck, I don’t even want a funeral! I want everyone to have a party! Everyone will know where I am (presumably heaven) and what I’ll be doing (presumably partying with angels).

I now see how young, naive, and ignorant these sentiments were.

As an introvert, moments like this (for better or worse) cause me to withdraw and over-analyze every little nuance of thought and feeling ebbing inside me. Questions that normally seem silly now feel valid: What is the “healthy” or “right” way to respond to this moment? What am I “supposed” to feel? How do I process this? How do I gauge how I’m doing?

Humans have been dying for a long time now. A very long time. And yet, we still have not found the “proper” response to the phenomenon of death. No matter how long we have watched it, heard of it, researched it, and have practiced dealing with it, Death has always seemed unjust, wrong, and unnatural.

That is the sense I’ve had throughout the past week, as I watched the hospice staff care for my grandfather and his vital signs decline, and as I had those existential questions rolling around inside of me. That one word–unnatural–kept lingering in my mind. And in it, I found hope and sustaining.

My feeling of offense and unknowing in light of Death’s presence–that sudden identification with the atheist that cries out against the goodness and even existence of God–is the very thing that testifies to the “foreign” nature of Death. 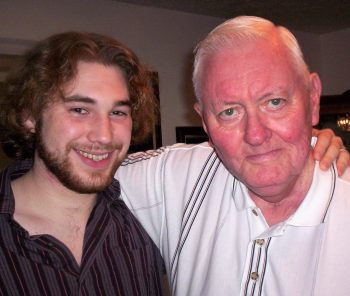 We were not made to die. We will never know how we “should” respond to Death because we never “should” have encountered it. The experience of Death hurts so badly because it is an outside invader that has woven itself so deeply within the fabric of our existence.

Not simply in veiled words hiding the Beauty of Beauties for millennia until the appointed time, but in a man–The Man. That quintessential man of his generation–and of eternity; that man who lives life as it should be known and then tastes the bitter reply of a world woven with that which it should not know: Death.

And He conquers it.

Death surely has a victory. Death surely has a sting. But let it be known that it is but partial and short-lived. Our souls are raised in this life and our bodies the next. Death shall taste it’s own bitterness and feel its own sting. Our life will indeed be Life.

But until such appointed time, we wait. And endure.

We wait with all the offense and pain and doubt and longing for a New Heaven and Earth, where Death has been unwoven from the fabric of our existence. We wait for a place where Hope–now seen only dimly through the veil of tears and doubt–will prevail; a place where Death will not merely taste our final Victory, but absolutely be swallowed up within in it.

2 thoughts on “My Grandfather’s Passing (Hope in Death?)”