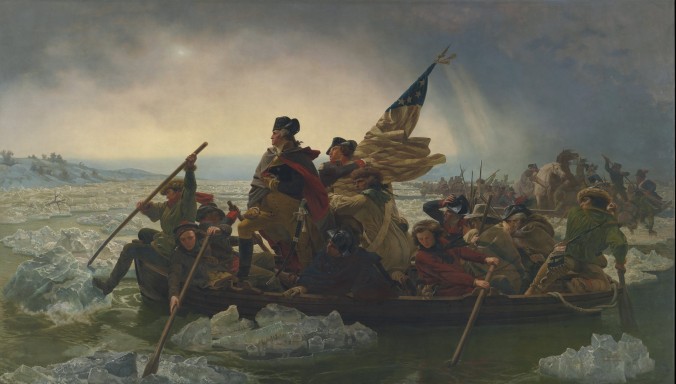 I’m currently reading Ron Chernow’s biography of George Washington, and it is astonishingly good (I believe the proper word is “magisterial”). In the book, I’m currently in the late 80s (the 1780s, that is), in the odd period after the War, but before he was drafted into Presidential politics. He’s having old friends visit him at Mount Vernon while he’s doing renovations after its long wartime neglect.

One of those friends was Washington’s first real biographer, David Humphreys–an aide of Washington’s during the War. He liked Humphreys so much that after the British defeat at Yorktown, Washington had him take the British flags from the fort and deliver them in person to Congress as the sign of victory.

Five years later, when Humphreys came to live at Mount Vernon while researching and interviewing Washington for the biography, Chernow tells us that Washington’s youthful, idealistic side came out a whole lot more. Recounting his greatest deeds with a fellow veteran, we see in his letters and diary entries that he waxes philosophical about the nation and its future. And it’s in this context that I ran across this quote:

“Rather than quarrel about territory, let the poor, the needy, and oppressed of the earth…resort to the fertile plains of our western country, to the second land of promise, and there dwell in peace, fulfilling the first and great commandment.” (474)

Immediately upon reading this, my mind connected it to current discussions of immigration in our country. I rushed to Facebook and posted this as a status–a not-so-subtle rebuke to those that would be harsh towards those seeking a better future in our land. “See? Even our most foundingest of fathers thought America should be more concerned with letting people in, not kicking people out!” (When he refers to “our western country”, he more than likely means “across the Atlantic”.)

Even as I posted this quote, however, I felt a little hypocritical. First, I really don’t think that America has been set aside uniquely in God’s Providence to have some “special divine status”. I’ve argued forcefully against this Christianizing of our politics, and yet I was willing to post this quote where that idea is clearly in sight.

Secondly, Washington really does not seem to have been a Christian in any orthodox or substantive way (and no, I’m not just taking the word of one biographer–Chernow actually tries to argue for Washington’s faith, saying it was just really private. I’m not convinced). And so, this invitation to walk more fully in God’s greatest commandment comes from the pen of a man who thought of that in dramatically different terms than orthodox, credal Christianity.

Lastly, as people were very quick to point out, if George was expressing any sort of sympathy for the marginalized and needy, he certainly didn’t have his slaves or the Indigenous Americans in mind. He definitely was thinking in terms of wanting needy and oppressed Europeans to come over to America.

And yet, I still posted the quote. With all these things undermining my connection to modern politics, I still posted it as a jab towards those who think differently than me politically. And you know what? A bunch of progressive-minded Facebook friends of mine immediately Liked the post–probably with the same intention.

But I worried not about this contradiction in the back of my mind and continued reading in the book.

And Now, the Rest of the Story

Before the War, Washington had been a very successful speculator of the western lands out toward Ohio, and had purchased a lot of it for himself–up to tens of thousands of acres. Then he left Virginia and acted as the noble General we know and love. Now that he was back home, though, he decided to go on a trip West and see how those lands were doing and see if he could make money off of them. It didn’t go smoothly.

Before he left, he used a familiar phrase to brag to Marquis de Lafayette that Congress had “opened the fertile plains of the Ohio to the poor, the needy, and the oppressed of the earth.” (481) But then he heard that many such settlers were squatting on his land, and he wasn’t very happy.

He traveled West, kicking people off his land, demanding back pay, exacting exorbitant rents, and complaining harshly about these immigrants to the land he owned. The most intractable settlers were from a family of dissenting Presbyterians who had settled on land he owned near Pittsburgh. This family, the Reeds, fought Washington bitterly, saying that they showed up before he ever bought the land. Thus, they decided to sue him instead of leaving the land or paying him rent.

According to the Reed diaries, in their final meeting with Washington, he ended it by

“asserting that they [the Reeds] had been forewarned by his agent, and the nature of his claim [had been] fully made known; that there could be no doubt of its validity, and rising from his seat and holding a red silk handkerchief by one corner, he said, ‘Gentlemen, I will have this land just as surely as I now have this handkerchief.”

And then he left. The lawsuit then took two years to work its way through the courts before Washington won the right to kick them off his land (he “graciously” opted to lease it to them instead).

I can almost imagine President-Elect Trump going to the Mexican border and saying the same thing while waving his silly red “Make America Great Again” hat in the air.

The Founders Were Human

One of the benefits of reading a biography as long and comprehensive as Chernow’s is that it drives home the reality that no human is a monolith. They are not only a mess of contradictions at any one time, but their views and opinions change and shift throughout their lives. This is true of all of us, no less our founding ancestors.

So even as we stand on their shoulders in trying to better this nation and its prospects, we would do well not to prooftext and cherry-pick those words that seem to support our own views.

But more than that, we ought not imbue the Founders with more authority than they demanded for themselves. They spoke often about their posterity, and the responsibility we have to shape this nation into what it needs to be today.

This is why appealing to random quotes by Founders doesn’t really do much in our political disagreements today. Not because they weren’t brilliant, but because they were human and changed and grew. All that to say: I was wrong and a bit over-eager.

Yet, the more I’ve looke dinto this, the more I wonder if there just might be a way we can appeal to our founders to help parse out a general immigration policy ethic that has been woven into our national identity–one that might guide us today. I’ll post that tomorrow.