Alas, due to my obsessive commitment to not let blogging get in the way of the relationships in my life, my promised post on the historical context of 1 Timothy will not be coming today (and may have to wait until next week). Instead, as part of this ongoing series, today I’d like to offer to all of you an excellent Op-ed that biblical scholar N.T. Wright posted in The Times of London (copublished here).

Last week, the Church of England voted not to allow any female bishops (though they have, for some time, allowed female priests). Prime Minister David Cameron bemoaned this, telling the Church they needed to “get with the programme” and ordain women bishops because that’s just where the world is right now, apparently. (This issue is also causing other political problems for the Church.)

Wright, who supports female bishops wrote the Op-Ed blasting Cameron for encouraging the Church to “get with the times”, saying that that is never a reason why the Church should do anything. He continues, blasting the idea of naive “progressivism” that has dominated monder thought.

Instead, he says, the Church should ordain female bishops because it’s biblical, not because it’s “cool” or “progressive”. He goes on to say that appealing to the culture does damage to the truth that it is biblical, and reinforces the patently false idea that those that oppose female ordination are the ones reading Scripture “literally” and “faithfully” while egalitarians are only listening to “culture”.

The Op-ed is brief, snarky, and powerful. Needless to say, it garned some thoughts from conservatives on this side of the pond. Doug Wilson did not just one, but two posts on it, and Denny Burke also wrote against it. The Internet Monk then brilliantly deconstructed their responses.

And so, I give you these men (why is it always men!) to read and discuss in the space below. Have fun.

Wrightians & the Neo-Reformed: ‘All One in Christ Jesus – A dispatch from Together for the Gospel and Wheaton’s Theology Conference with N.T. Wright

The article compares and contrasts the general ethos of two very different conferences that occurred very close to the same time.  One conference was the Together for the Gospel Conference and Wheaton College’s Theology Conference with N.T. Wright.

END_OF_DOCUMENT_TOKEN_TO_BE_REPLACED

As I revealed in a recent tweet, I believe I’m walking into a new obsession with the author/scholar/pastor N.T. Wright. Surprising to many, I’m sure, with me being a seminarian and all, is the fact that I had never read any Wright before this book. Sure, I’ve known of his existence for years, had seen a few of his YouTube clips, and skimmed a few of his articles, but I had never read his books. My housemate during the two months or so before seminary began reading through Wright’s entire Christian Origins and the Question of God series (books 1, 2, 3) constituting over 2,100 pages of reading. He couldn’t stop reading, nor stop telling me about how amazing this man was. I nodded and agreed, sure that I would read something at some point. I had no idea what I was missing.

END_OF_DOCUMENT_TOKEN_TO_BE_REPLACED

it’s been a little while since I posted anything and a while since I posted a really substantive post up here.  Apologies.  I have several articles in the works that I’m really excited about that I’m working on for both this blog and other places.  The past couple of days I’ve been absolutely knocked out of commision by a stomach virus of some sort that has kept me perpetually near both my bathroom and bedroom.  It’s been a long time since I’ve been this sick.  So, if you’re the praying type, please do so for me.  If not… well…. wish me luck?  Here are the things that have been keeping me company as I’ve been sitting on the sidelines trying to survive: 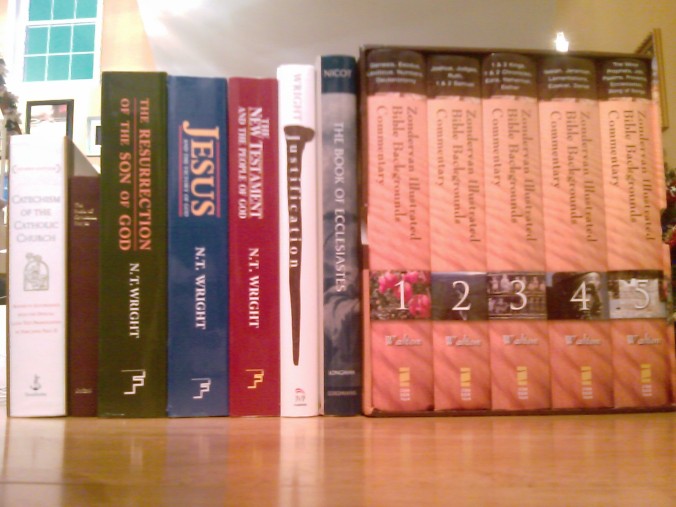 In order from left-to-right: