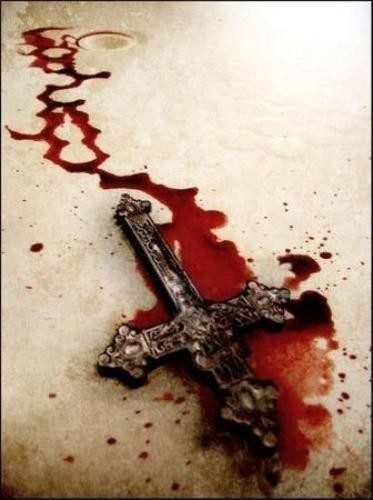 I know, I know — this seems like a weird topic to inaugurate this series. Today, in my ongoing series “Catholics Aren’t Crazy” I wanted to put up a post on a Catholic view of Scripture, inspiration, and inerrancy. They have some amazing things to say on these topics that Evangelicals could do really well to embrace. But alas, current events have changed that plan. Tomorrow I’m posting up a potentially controversial article here on a Christian view of Torture. I’m writing it in light of the recent developments, publications, and interviews concerning the legal and ethical exoneration of the “Torture Memo” authors, John Yoo and Jay Bybee. In my research I stumbled upon the following wonderful article by Andrew Sullivan of The Atlantic, posted on his blog on Ash Wednesday:

The article concerns Marc Thiessen, former speech writer for President Bush. Thiessen is on a tour of every news outlet it seems (I’ve seen him on like four different ones just this past week) to promote his brand new book, Courting Disaster, the point of which is pretty much as follows: Our “enhanced interrogation” techniques were moral, effective, and NOT torture; and President Obama has ended them, thereby “inviting the next attack” and putting everyone in America at risk of being slaughtered by Islamic extremists.

END_OF_DOCUMENT_TOKEN_TO_BE_REPLACED

By the time I finished the next article in the series, it was substantive enough and socially-oriented enough to warrant being posted on my webzine Reform & Revive.  The previous post was on on how secular Philosophy can inform our view of ethics and contribute to the discussion of Slavery, Atheism, and the Bible.  This one is about how Christian theological ethics can uniquely inform our ethics in modern times.  The article covers a LOT of ground and is the longest one I’ve written yet in this series.  Hopefully that’s not a turn off.  This article has more of my thought concerning truth and Biblical interpretation than perhaps any one article I’ve ever written contains.  Here’s the link:

It seems in light of my earlier post I’ve decided to pour more of myself into this series, rather than just quickly finishing it off.  Hopefully it’s helpful.

Lastly, I keep getting private emails, texts, and messages from Christians talking about how much they’re enjoying this series, and how helpful it is to them, but hardly any Christians are publicly commenting.  I’m getting tons of comments from my atheist friends, though.  Discrepancy?  I think so.  If you have a thought, please leave it.  It could be really helpful to get more input on this and diversity of thought on this.

Thank you all for your support and encouragement.  It means a lot.

I wanted to write a quick note to anyone that’s been confused about the lack of writing on all of my sites.

For one reason or another, I’ve decided to do more research on the Slavery, Bible, and Atheism series.  Here’s why: It’s a six part series and so far each part has required two separate posts.  I am mostly done with the second post of Part 2, and for the whole series so far, I have almost 20 pages of content written.  With the stuff I want to say, and the content I wish to cover, I’ve realized that by the end of the series, if I stay on pace, I could have anywhere between 60 and 75 pages worth of material written.  And this doesn’t even include the pages worth of comments I’ve written on comments on Facebook and here on the blog.  So far, all I’ve written has been very “bloggy” in style and language; in other words — completely unworthy of even considering trying to see published.  It’s been very polemical and directly addresses other people and conversations not directly involved in this blog.

END_OF_DOCUMENT_TOKEN_TO_BE_REPLACED

I know we’ve all had the followng experience: you’re in a group of people and someone makes a really good joke or pun.  Someone else in the group builds on that joke and the laughs increase.  Someone else does it.  This repeats itself over and over again as people build on the joke.  Eventually, the topic changes and the conversation moves on, but your mind is still churning, trying to figure out something else you could have said while the joke was going.  Sometimes you think of something that would have been truly brilliant and inspired if you had just thought about it a minute and a half earlier.  You consider saying it anyway.Whether or not you end up saying the joke says a lot about you, but either way you end up feeling pretty stupid.  You either say it and it’s awkward, or you don’t say it and then feel like an idiot for having exerted so much time and thought to a joke you knew you could never tell.  Why did I go through this whole scenario?

Because I had a thought today that I wanted some feedback on. I can’t remember what started it, but this morning I was thinking about some political idea and became more and more impassioned about it. I was angry and zealous, and felt like I had articulated in my mind the perfect flow of thought and nuanced argumentation that would convinced even my most ardent naysayers. I then thought (of course):

I should put this on my blog!

But then I felt a little absurd.  I felt that same absurdity one feels when the joke has already passed.  And this feeling struck me as a bit odd.  Has the national “joke” that is Politics passed (at least for a time)? Are we really in a relative political peace right now, where impassioned zealous political debate seems out of place?

I mean, the health care thing has quieted down, people seem to at least appreciate the time and consideration that’s being put into a decision on Afghanistan before it’s announced, the economy seems to be at least evening out if not moving back up now, and the biggest political frustration right now has to do with the administration’s opinion that Fox News isn’t a legitimate news organization.  Heck even things that you would think would cause uproar hasn’t.  Gay rights marches, talks with Iran, and the occasional “tea party” (I’m shaking my head right now) are reported on with a relative ho-hum sort of attitude.

Maybe I got too used to the absurdities and loss of decorum that have ruled the both sides of the political world since last November (I’m having flashbacks of a particular outburst during a speech by the President).  Maybe I’m just a bit too late to get in on the joke.  Or maybe I’m just a fighter by nature and I feel weird when there’s nothing for me to give my opinion on that seems relevant and timely.  Maybe I should learn to be content writing/thinking about seemingly inconsequential-to-everyday-life things like theistic evolution and the eternality of Hell.  But let me just ask all of you:

What’s the big political story right now?  Am I missing something?  Is the joke still going on, or has the punchline already passed?  Is the world finally settling in and learning what the rhythms of everyday life in an Obama world looks like? What do you think?